We create a graph template that fits the data of a specific experiment and then plug multiple datasets into that template, creating quick and easy waveform plots for data exploration and publication.

Researchers in the psychology department at Rice University are working on a theory that the brain’s reward motivation system, which uses the neurotransmitter dopamine, is involved in this selection by identifying objects and actions that are either more or less rewarding than expected. Those items and actions that exceed or fail to meet reward expectation are selected for preferential processing. If this model is correct, it adds a critical piece of the understanding of attention and working memory.

These researchers also believe that this selection system malfunctions in some mental illnesses (for example, the dopamine system is disordered in schizophrenia, and patients with schizophrenia have disordered thinking, as if the wrong items were being selected for processing).

Scientists are also looking at how altered functioning of this reward-based selection system might be related to substance-abuse disorder by mistakenly identifying drug-related items as excessively rewarding and by underestimating the negative consequences of risky behaviors.

In the psychology lab at Rice University, ongoing neuroimaging studies of perception, attention, and motivation are performed on normal subjects and in patients with psychopathology. Three lines of work are currently taking place – line 1: work on the basic model in normal cognition, line 2: examining how the system goes wrong in schizophrenia, line 3: studying substance abuse and personality characteristics associated with substance abuse. Each line has one or more ongoing experiments and each experiment takes approximately 2-4 years to complete, from conception to publication.

Most of the work so far has involved around 200-300 normal college students studying the basic mechanisms of attention and motivation. Data has also been acquired from 30-40 patients with schizophrenia and 50 or more patients with substance abuse.

The researchers in the lab previously used in-house applications (text-interface) or inflexible plotting sub-routines of software designed for digital-signal processing of brain electrical activity. These were either no longer supported or did not have sufficient flexibility to meet their needs. Then they turned to KaleidaGraph.

The data is output from the proprietary software used for the brain electrical digital signal processing in tab-delimited text files. Some minor pre-processing in Microsoft Excel is performed, then that file is opened directly by KaleidaGraph.

Multi-dimensional data (time (milliseconds) x amplitude (microvolts) x location (128 scalp recording electrodes) x experimental condition or diagnostic group or combination (e.g. schizophrenia patients attending vs. patients not attending vs. control subjects attending and not attending)) is plotted. These are usually multiple (one for each recording electrode) time (x-axis) by voltage (y-axis) line overplots (one-line-type for each group in each condition). 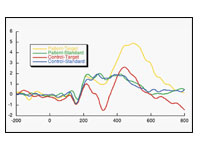 “We quickly generate time x voltage plots of human brain electrical activity using KaleidaGraph,” states Geoffrey Potts, who is now an Associate Professor at the University of South Florida and a KaleidaGraph user since 2003. “We create a graph template that fits the data of a specific experiment and then plug multiple datasets into that template, creating quick and easy waveform plots for data exploration and publication.”

Download our free trial and follow the Quick Start guide to see how easy it is to create publication-quality plots.

Ready to take a step up from Excel?

See why so many of our customers stopped struggling with Excel and moved to KaleidaGraph for their graphing needs.